Freestate is proud to have had the opportunity to participate in two large projects for Tradepoint Atlantic at Sparrows Point and we look forward to future work on this site! 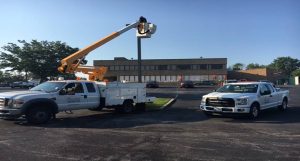 Freestate is working with Local 24 to upgrade their Patapsco Avenue Union Hall building and grounds. As part of their green initiative Local 24 will be reducing its carbon footprint while enjoying improved safety and security by upgrading the exterior building and parking lot lighting to state of the art LED lighting. The local will benefit from reduced energy costs and will take advantage of available rebates from BGE as well. Plus, the longer service life of the fixtures helps reduce maintenance and replacement costs. Freestate continues to support the efforts of Local 24  to showcase the services we provide in the best possible light.

Cole Field House at the University of Maryland officially opened on Wednesday August 2, 2017.  Freestate Electric is proud to have been a part of the team that made this project a success!

Full story from the Baltimore Sun

Cole Field House at The University Of Maryland

Freestate Electric is a member of the Archway Captive Insurance Company. The Captive has over 200 members whose annual revenues range from $20 million to over $1 billion. In both 2011 and 2013, Freestate was chosen to receive the Risk Control Award of Excellence thanks to its stellar risk control record and commitment to employee safety. To Freestate, safety is more than rules and procedures, it’s a culture that is practiced and executed every day. Being a multiple time winner of this prestigious award is something we take great pride in, but what is more important is ensuring that our employees work smart and safely every day.

Craftsmen from Freestate Electrical Construction Company were recently honored at the Washington Building Congress’ 61st Annual Craftsmanship Awards this past March for their outstanding lighting work at Trump International Hotel at the Old Post Office in Washington, DC.
END_OF_DOCUMENT_TOKEN_TO_BE_REPLACED

Detailed mock ups were performed for every area and setting of both the interior and exterior of the Hotel to ensure perfect illumination and accent of all areas including the historical elements of the Hotel. This took careful field review and research of each existing condition to determine the best means and methods for how systems would be installed. In many instances modifications to the design had to be made in order to meet requirements and satisfactions of project stakeholders, while minimizing damage to historical elements through providing quality installations and craftsmanship. Work required thorough research and coordination by all disciplines and to archive approval granted by the Trump owners as well as the design team. The difficult installation process would begin for each system within the confines of an existing historical building that was completed at the end of the 19th century. There were many unforeseen obstacles and obstructions where all parties had to take part in discovering resolutions and modifications to complete their installations. Great care and consideration on every level had to be taken by each individual involved in the work that was performed.

The Electrical Upgrade project at the National Institute of Health was done in multiple phases over several years beginning in March 2007 and completing in November 2012. The project required some design assist as the conditions were constantly changing from the original drawings as existing spaces were uncovered. The West Vault and Risers phase of this project was awarded a 2011 WBC Craftsmanship Award for Electrical Distribution. The Tunnel & East Vault Project phase of this project was awarded the 2013 WBC Craftsmanship award for Electrical Distribution and was nominated as a finalist for the Star Award.